Although Kilbride was officially formed in 1948, the club’s beginnings go back to the early 1920′s. As far as can be ascertained a gaelic football team started in the parish in the early 1920′s. Around 1932 this team disbanded and some of it’s younger players transferred to the Flathouse team. This team was attired in vertical striped jerseys and wore hats or caps as was traditional at that time. From 1938 onwards a group of players travelled to Hollywood Rath to play matches against the Brothers and patients of St. John of God.

The first committee was : 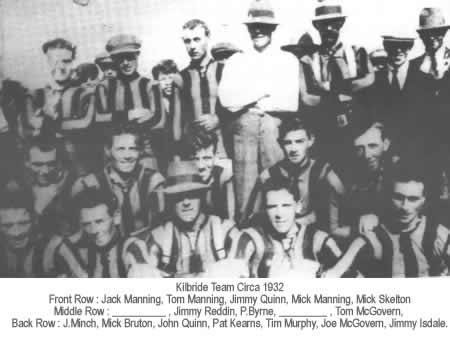 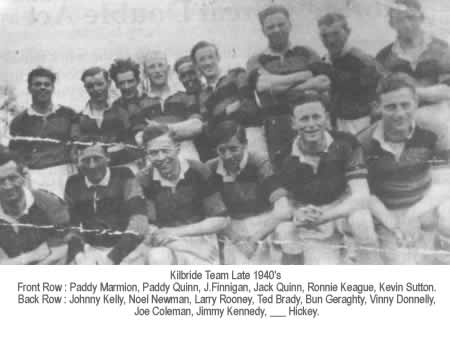 It was in Frank Cannon’s yard in Ballymacarney in the year 1948 that the foundation of the current club was laid when Joe Murphy asked Larry Rooney and Paddy Marmiam if they would help him to get a team together. A team was entered in a league and since that time Kilbride has taken part in adult championship football in County Meath. Fund raising was organised and a set of black and blue hooped jerseys were purchased. The players of that time contributed weekly towards the purchase of boots and socks.

The first teams played and trained in a field owned by Conix Solicitors, on land owned by Liam Kavanagh, in Butlers of Priestown and during the early 1950′s on the land of the Brothers of St. John of God. In the Mid 1950′s the club moved to Sweeney’s field and it became the club’s home base until the end of 1977. The club acquired it’s current playing field in 1983 and then in 1990 started building a club house with modern dressing room facilities, which was finished in 1993. On 13th May 1995, the club house and sports field were officially opened with the meeting of the Meath and Clare senior teams in a challenge. It is a great testament to the hard work of the members , good management by the commitee and the support of the community in general, that at the time of the official opening of the grounds everything was fully paid for. In 2002, work commenced on a floodlight system which will enable the team to train throughout the year. One side of the pitch is completely floodlit, with the other side due for completion in early 2004. 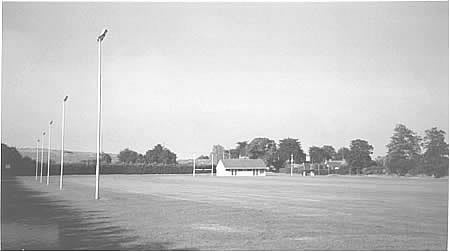 Green and Red have been the recognised club colours since the mid 1950′s, although it is not known if there was a specific reason for the adoption of these colours. Other colours have also featured in the history of the club. The team of the 1920′s era wore a vertical striped jersey which was probably black and white. When the current era began, the team wore black and blue hooped jerseys, while the juvenile team wore green and white. It is interesting to note that when Kilbride won it’s first Senior Championship in 1964 due to a clash of colours, Kilbride wore the Ratoath jersey’s of Blue and Gold.

The Kilbride Camogie club was formed in 1964. The club won Meath Senior Titles in 1981, 1983, and 1984, Junior title in 1974 and 1992 an Under 16 and Under 18 Meath Championship. For a small club these were fantastic achievements and resulted in many players representing Meath.

Little success came Kilbride’s way during the 1950′s, but a golden era started for the club with the winning of the Meath junior championship in 1960 and during the next fourteen years the club achieved the following :

Also during this period the club were runners up in the league on a number of occasions and travelled all over the country to play challenge games and tournaments.

Since 1974 many fine players have represented the club and many fine teams have been tuned out to play for the club. Although success on the field of play has not been on a par with previous years the club has been very involved in developing and promoting the game at all levels for males and females and in doing so have liaised with the local school and made it’s facilities available to the school for the playing of gaelic games. The club dropped to intermediate ranks in 1979 and to junior grade in 1984 where it has remained ever since. Since 1974 the club has achieved the following :

In 2001 Kilbride were promoted as winners of Division 5 to Division 4 and had a very good season just missing out on promotion to Division 3, despite numerous short term and long term injuries. Kilbride missed out by one point from qualification from the group stages to the quarter finals of the Junior championship. The only team to beat Kilbride in the Championship was Nobber, who have since gone on to become Meath, Leinster and All Ireland Junior Champions. There is a new optimisism within the club, that with an excellent new manager Martin McCarthy and a promising young team, that Kilbride can return to it’s rightful place at the top of Meath Football.

Since it’s formation the club has been prominent in it’s support of Meath football and has contributed as follows : 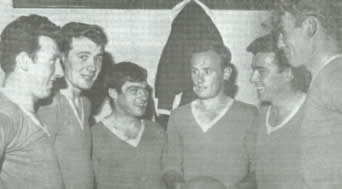